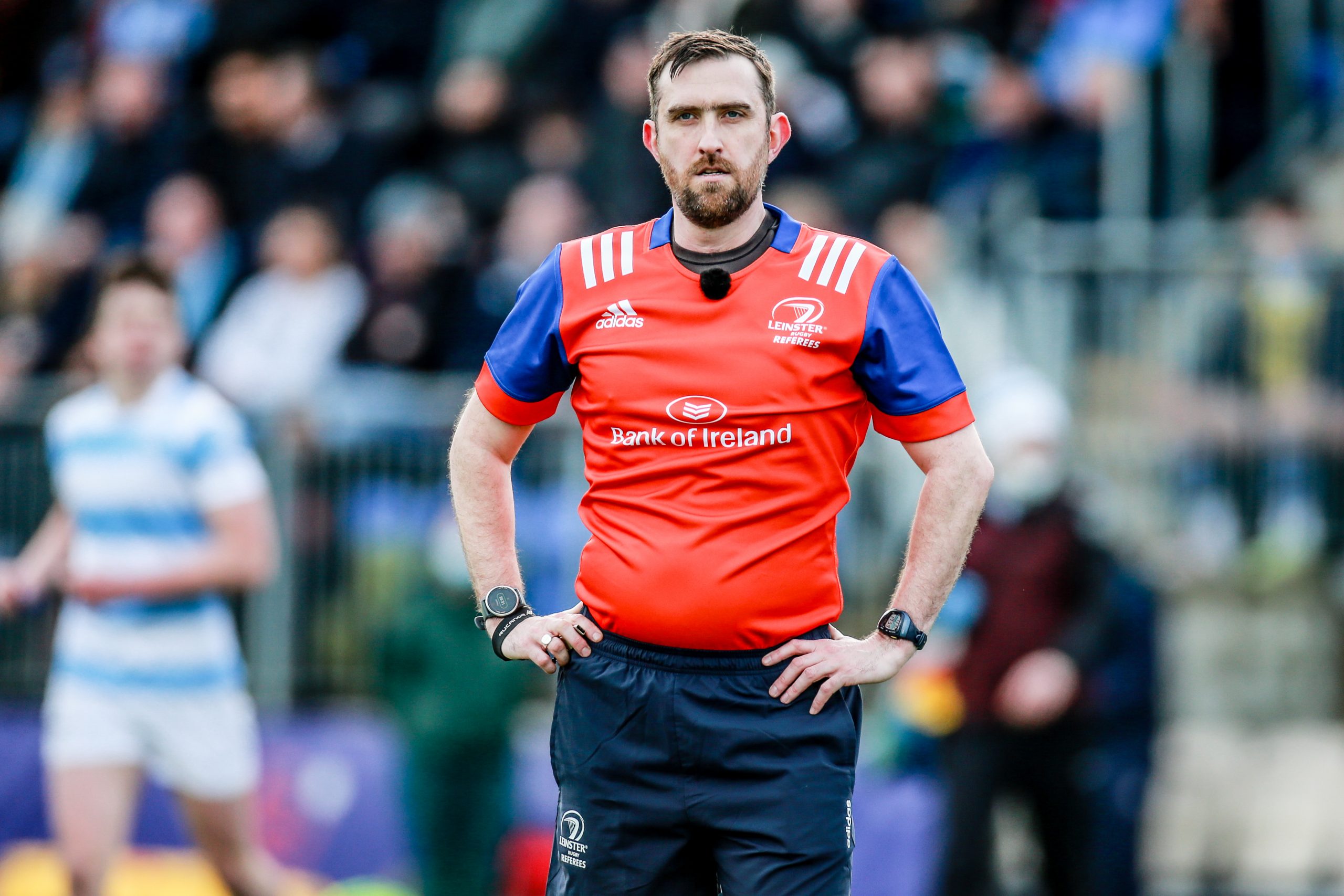 A warm welcome to this edition of referees corner. Today’s match referee is Gianluca Gnecchi from Italy. Gianluca hails from Brescia Italy where he started his refereeing journey. He refereed the Six Nations Under 20s Championship before making his Pro14 refereeing debut in the match between Zebre and Benetton in 2020, where he was assisted by fellow Brescian referee Andrea Piardi. Piardi himself was an assistant match referee for last year’s Six Nations game between Scotland and Wales and also refereed Leinster v Bath in January. Gnecchi refereed the 2023 Rugby World Cup qualifiers in South America, refereeing the match between Brazil and Chile last July. Gianluca will be assisted by Andrew Brace (MAR), Dan Carson (USRFR)  and TMO Leo Colgan (MAR). We wish them all well.

Our area meetings for February are in full swing. This month we look at two recent World Rugby Law Clarifications and discuss some current trends in the game – global law trials, materiality and advantage. The two law clarifications are: 1. the addition of Cotton blend long tights or leggings, with single inside leg seam under their shorts and socks to permitted players clothing. No mention of referees being allowed to don leggings on a cold day. Whilst women have been allowed to wear leggings for some time, this is now extended to men as well. The second clarification that we discussed was that recently there have been instances of rucks being extended sideways which gets the last player very close to the opposition 9 when he/ she is box kicking. This reduces space and the options available to players.

The clarification states that: Adding players to your own side of the ruck, in order to advance closer to the opposition side of the ruck, as shown in the clips attached, squeezes the space available and compromises the clearance of the ball from the ruck. These actions should be discouraged. If a player is fully bound and they have moved beyond the offside line then they must return to be behind the hindmost foot before being able to be involved in play, once the ball is out or is played from the ruck. More information at https://www.world.rugby/the-game/laws/clarification/2021/3

The discussion on advantage is always an interesting one. The advantage Law as designed allows the game to be more continuous and have fewer stoppages. Sometimes, during a game, an infringement of the Laws may be committed where a stoppage in play would deprive the non-offending team of an opportunity to score. Even though the Laws state that the non-offending team should be awarded a penalty, free-kick or scrum, they are given the opportunity to continue with open play and attempt to score a try. In this instance, the referee will allow play to continue rather than penalise the offence.

Advantage can be applied to either minor infringements (e.g. knock-on), or offences which would result in a penalty (e.g. offside). The decision has to be made by the referee as to whether there may be more benefit to the non-offending team if play continues. If no advantage occurs, the referee will blow the whistle and bring play back to the place of the original infringement which occurred prior to advantage being played.

Sean Gallagher facilitated the discussion with some examples of recent clips where good and bad advantage was played. The key question is often – how much advantage should  be played?

Materiality is always an interesting discussion. Whilst we can see many infringements on a field, they do not all have consequences for the non-offending team and we can move on with the game. Corris Thomas, the legendary Welsh referee of the 1970s (Munster v All Blacks), uses a legal principle that is used in public law making, to explain the concept of materiality: ‘De minimis non curat lex.’ This Latin phrase, which translates as, ‘The law does not concern itself with trivialities’ is a principle of Law which means that even if a technical violation of the Law appears to have occurred according to the letter of the Law, if the effect is too small to be of consequence, the violation of the law will not be considered as a sufficient cause for punitive action.

This principle, taken from the world of law school, is indeed very applicable to refereeing a game of Rugby. The principle does not mean a disregard for any Laws, but rather it is an encouragement to enforce the Laws, but only when the circumstances for which those Laws were created actually occurs. It is still necessary to accept that two criteria must apply to create the need to penalise a team in a game of Rugby: