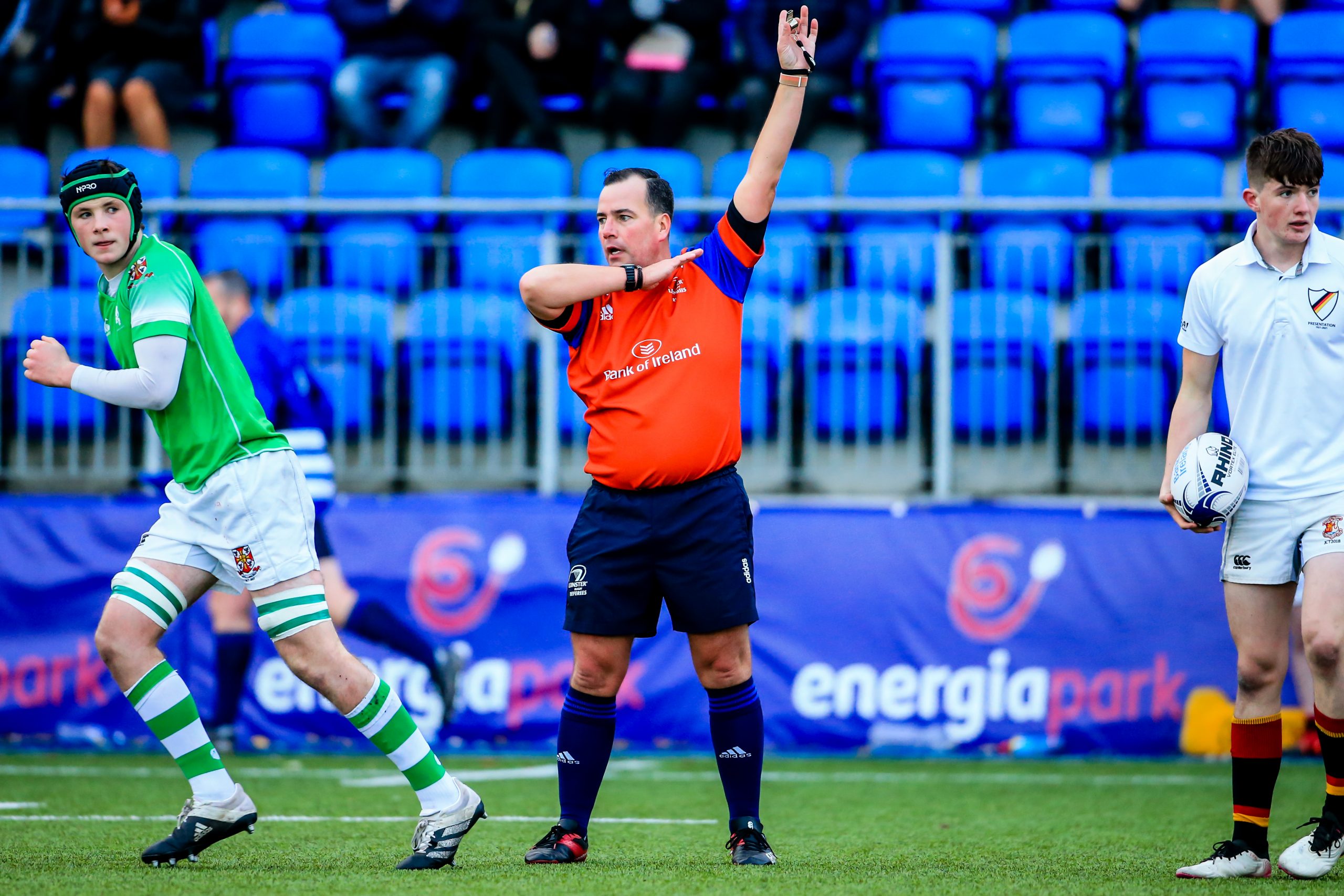 The start of the new year saw some changes to the IRFU National Referees Panel. Congratulations to Robbie Jenkinson who was promoted to Level 3 following some excellent domestic performances. Robbie joins Michael Forrestal and Paul O’Connor. Colm Roche, John Flynn and Sam Holt were moved to the Level 2 panel where they join long serving referee John Carvill and Glenn Sheridan. Padraic Reidy moves into Level 1. Padraic recently refereed the All Ireland Junior Cup Final. He joins Dermot Blake, Andrew Cole, Nigel Correll, Paul Haycock, and Cillian Hogan. This brings a total of 14 Leinster Rugby Referee on the IRFU National Referee Panel. We wish them all well for the remainder of the season.

We had over 200 referees at our first referees seminar of the season in January. The topic of the seminar was Game Management and the session was enabled by Sean Gallagher from the IRFU alongside Jim McCourt from the Leinster Disciplinary panel and International TMO Brian MaNeice. The presentation went through a number of topics  including Positive Referee Behaviors including some guidelines on working with coaches before, during and after games, developing positive relationships with captains and players alike and also how to work and deal with external factors. Brian MacNeice spoke through various scenarios that a referee may encounter and how to work through those scenarios. Preparation is obviously key and running through the scenarios in your head is important preparation.

We had an excellent Q&A session after,discussing various scenarios that referees have encountered. The meeting was held online, but we look forward to getting back to in person meetings in the near future.

World Rugby often publishes law clarifications during the season. If a union in membership is unable to clarify an aspect of law it may submit a request for a clarification in law to the World Rugby designated members. The World Rugby website https://www.world.rugby/the-game/laws/clarifications contains all such requests for clarifications as far back as 2002 and gives the associated response from the designated members. On occasions, clarifications in law will result in a law amendment. There have already been 2 in 2022. The main one is that England Rugby have asked for clarity relating to when a ball is deemed to be leaving/emerging from a ruck and when such a ball can be dived on to claim control of the ball. Law 15 describes how a ruck ends, and says a player cannot fall onto the ball, but we seek clarity on when a player is legally entitled to dive onto the ball?

World Rugby responded with relevant law wordings. (There is an excellent video to accompany this explanation on the website)

Definitions: Near = within one metre.

The ball is leaving/emerging from the ruck when it is in motion away from the ruck, or when the ball is sitting just beyond the hindmost player. This becomes relevant when determining if a player can fall onto the ball so that player can comply with law 15.16. In being consistent with other areas of Law (Scrum law 19.38a, tackle law 14.8d), we determine that the player can only dive onto such a ball if it is more than 1m away from the ruck it has emerged from. ‘Near’ is defined in law as being “within one metre.” If the ball has left the ruck, then the ruck is over, and the ball is out. Providing a player comes from an onside position and does not dive onto the ball if it is within 1m of the ruck, they may play the ball.

Will this answer the much asked question – Is the ball out ref?