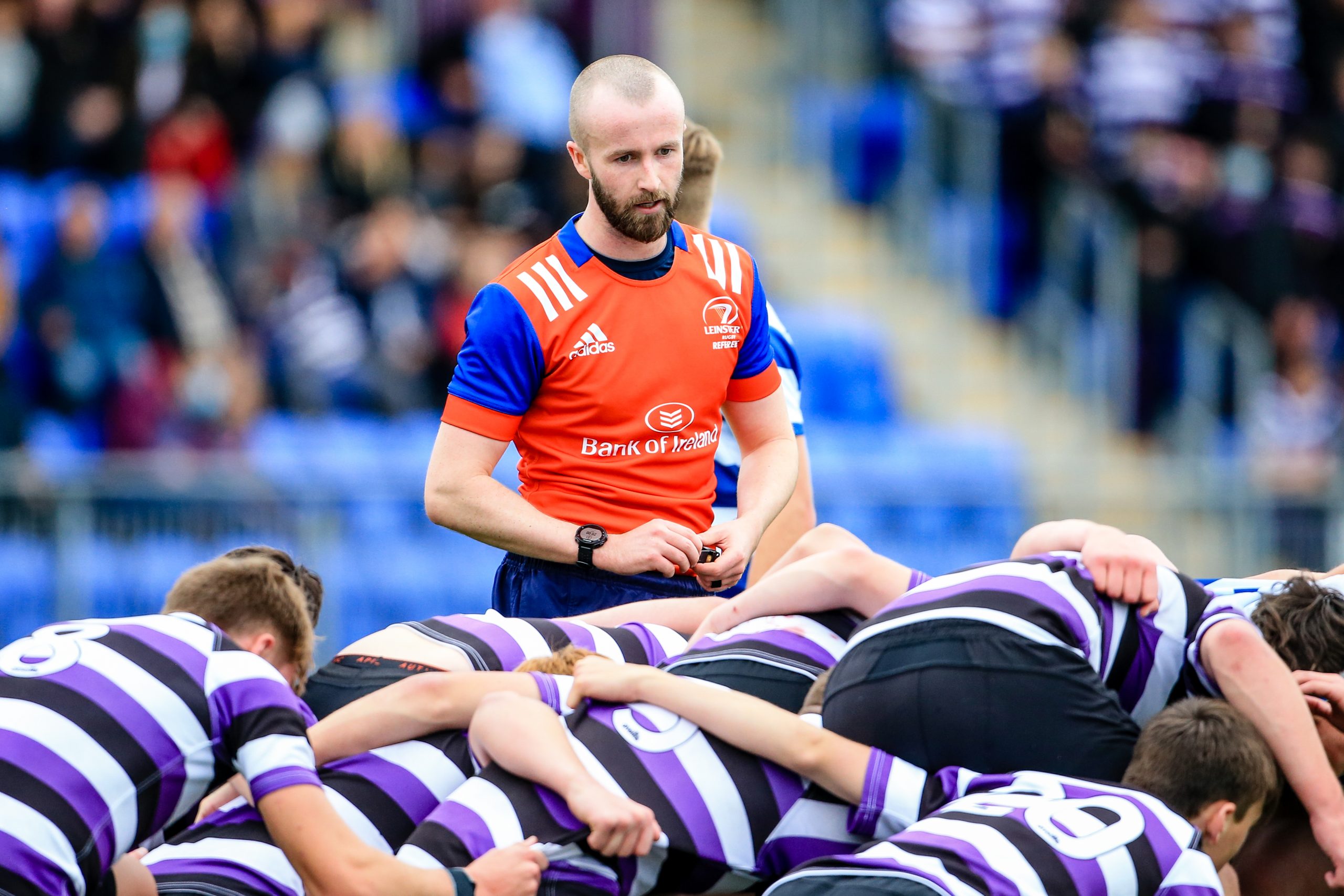 Welcome to another edition of referees corner and a very warm welcome to todays match referee Marius van der Westhuizen supported by Keane Davison and Andre Fogarty. Marius was born in Cape Town, South Africa. He started refereeing first class matches in 2011, making his debut in the 2011 Vodacom Cup match between the Free State Cheetahs and the Falcons in Bloemfontein and took charge of ten matches in the 2011 Under-19 and Under-21 Provincial Championships. He was named on SANZAR‘s referee list for the 2014 Super Rugby season and was in charge of his first Super Rugby match when the Lions met the Crusaders in Johannesburg. He also officiated at the 2014 Commonwealth Games in Glasgow. We wish him a warm welcome today.

One of own recently promoted referees, Robbie Jenkinson is already making great strides on the IRFU National referees panel. I had the chance to catch up with him last week, when he was just back from touch judging for Andrew Cole in the Rugby Europe Competition between Black Lions and Batumi in Tbilisi.

What made you decide to take up the whistle?

My dad was a referee (now an assessor with the ARLB) so I’ve always had an interest in that side of the game. After I picked up a broken knuckle playing senior rugby with Skerries RFC he encouraged me to pick up the whistle and give it a go while I was rehabbing my hand. I played for a number of years after that but some more frustrating injuries down the line pushed me back towards refereeing where there were more opportunities to go further in the game.

How long are you refereeing now and what level are you at?

I’ve juggled refereeing and playing since 2014 but from 2019 until today I’ve just been refereeing. I’m currently on level 2 of the national panel.

What is the biggest thing you have learned since you started out?

The biggest thing I’ve learned since I’ve started out is that the perfect game in terms of a refs performance doesn’t exist. There will always be mistakes or something missed. It’s what I found hardest coming from playing where you practice set piece plays & patterns so much that you expect perfection from your role and anything less than that is almost unacceptable. It’s an important psychological skill being able to deal with, learn from & park your mistakes and it’s something i’m still trying to embrace.

What was the process like to become a referee?

It all starts with the new recruits course run in the Leinster branch. This is your first taste of

what refereeing is all about. It’s pretty daunting but exciting going into that environment at first with a lot of new and random faces but you quickly become tight knit with a lot of these people. You’ll have your trial game where you’ll be assessed by an ARLB assessor on your performance, knowledge of the laws and your management of player safety. If you get through your trial game you’ll be passed as a member. Thereafter there’s a huge amount of people and resources within the ARLB willing to help develop you as a referee, a lot of which have helped me get to where I am today.

What is your favourite thing about refereeing?

There’s many things I could list as my favourite thing about refereeing. To put it simply, it’s still being in the game. It’s the challenge & pressure of some games with the nerves and physical/mental challenges that come with it that I love. It’s also the people you meet and the friends you make are what makes it great too.

What is the most memorable game you have refereed so far?

I refereed Leinster A v AIL XV at the very end of last season which was more of an exhibition game but the pace of the game and the skill level on show particularly at the end of the season when the fitness and skill levels are at the peak was incredible. The week before I was AR in my first URC game for Munster v Cardiff which was a surreal experience with it being my first taste of the pro game but that was a great buzz. A very memorable week.

I like to do a lot of band work, stretching & loosening up before doing any running or the actual warm up. The only superstition I have is that I need to give my dog Boo a belly rub before I leave for a game. Some crowds are very welcoming, shouting my dog’s name from the stands sometimes.

What are your refereeing aspirations?

I’d be lying if I said I didn’t want to get to the top, you need to dream big but there’s also a lot of short term milestones that i’d like to hit which requires performing well and learning from every experience in the meantime.

For aspiring referees what do you think  will make you improve as a referee?

Aside from the vitals like good fitness levels & law knowledge, experience & improvement comes from your failures & mistakes. The more you ref, the more opportunities you’ll have to iron out any of those bad habits and mistakes which will ultimately make you a better ref. Being coachable and soaking up constructive criticism will help drive improvement.

What advice would you give to someone thinking about taking up refereeing?

I would just say give it a go! you might love it, you might not, but at least you’ll know. Refereeing has given me some great friends, incredible memories and plenty of unbelievable opportunities to date. you never know where it could take you.