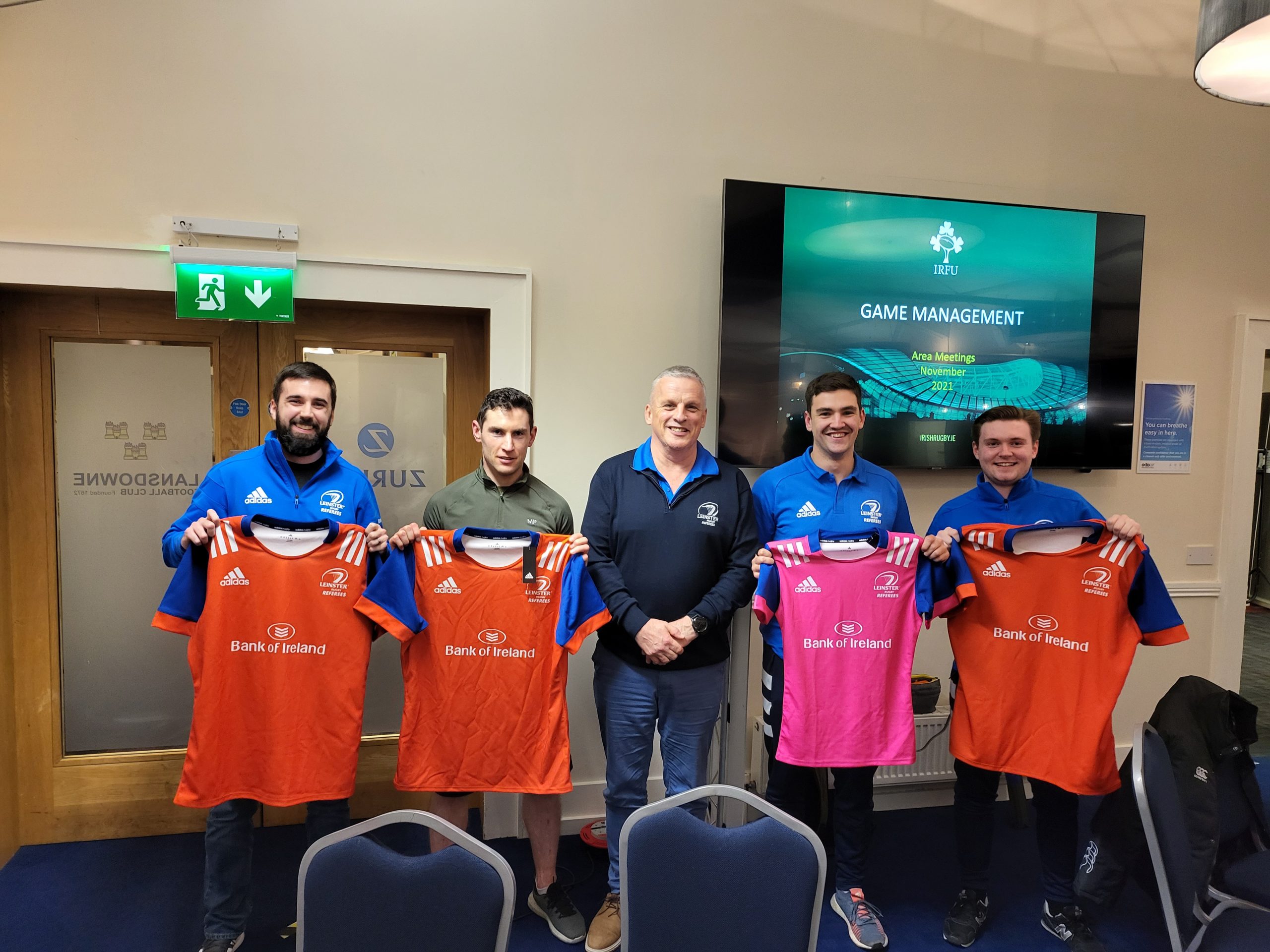 Welcome to another edition of Referees Corner and a warm welcome to Frank Murphy, today’s match referee and his team. Frank is a former rugby player. Originally from Cork, Murphy played for his native province of Munster before moving to the English side Leicester Tigers, with whom he won a Premiership title, and then finished his career with Connacht, another Irish province, making over 100 appearances for the side.

He began refereeing in the All-Ireland League in 2015, progressing to referee in the British and Irish Cup later that year. He began refereeing at international level in 2016, and has taken charge of games in the European Nations Cup. In November 2016, Murphy took charge of his first Pro12 game, and has since gone on to referee in the Challenge Cup at European level.

We’re wrapping up our 2021/22 season in Referees HQ and it has been fantastic to see so many competitions back in full swing and see our referees back on the pitch. Referees play a central role in our game and we are justly proud of how we have conducted ourselves and our contribution to rugby in Leinster this season, both on and off the field, maintaining the integrity of our association and the high esteem in which it is held.

We had a tricky but successful season with our trial referees. We ran 1 new member workshop on October 30th, with the attendance of 25 recruits. In total, a record number of 36 trial members passed trial matches and attained full membership during the season. Compliments are due to Sean Gallagher, Norman Carter, Tom Colton and Jim Breen for their hard work in achieving these outstanding results. The next new recruits’ workshop will be held on Saturday August 27th. Details further on.

This season, we also launched a new programme of mentoring with IRFU guidance. Norman Carter took on the role as head of mentors, and recruited approximately 40 active and former referees to act as mentors. Training was provided by the IRFU, and as a result, almost 70 referees have received mentorship during the season.

During the season, head of evaluation Jim Breen and his sub-committee deployed approximately 25 evaluators. These evaluators are responsible for assessing our referees in the field and recommending promotions and demotions amongst other things. In total we completed well over 300 evaluations, covering our own referees and also covering National Panel Referees and IPAS Referees. In all almost 200 individual referees were evaluated, a great return.

Under the guidance of Barry O’Keefe, using a combination of ref cam and attendance at matches, we deployed a number of coaches who issued almost 50 coaching reports. This is significantly more than previous years. Coaching and evaluating differ greatly. Coaching focuses more observing the referee and giving them a couple of items to work on over the following weeks.

A referee development team of 6 individuals, directed by Steve Griffiths, run the activities of our development group. The development group is made up of referees that we see as having the skill and ability to move to the top level of refereeing in Leinster and onwards to perhaps the National Panel. This group and the work coming from it, involves a serious commitment on their parts to allow them to become the best they can be as referees. The group for the season consisted of 9 referees, 3 of whom were in IPAS. All 3 IPAS members performed very well throughout the season, as a result of which Robbie Jenkinson has already been promoted to the National Panel, and Katie Byrne has already refereed at AIL level.

Our area representatives are one of the cornerstones of our association. Their level of commitment and work rate can never be overstated. To Joe McDermot, John Dunne, Tom Colton, Paddy Curran and Kevin McDermot a massive thank you for all the work they put into their areas, especially youth and underage games!! Also many thanks go to Hayley White in our Administration office, who makes sure everything runs smoothly.

For the first time in two years we were able to hold our annual dinner. Held in Lansdowne FC on the 9th April a fabulous night was had by all. Over 130 attendees and expertly organized by Barry Dempsey and his team. The presidents from both the IRFU and the Leinster Branch were in attendance. A full set of awards being handed out on the night.

​​Do you want to explore a new way to be involved in the game next season?  Leinster Rugby Referees are inviting applications for their next New Referees Course which will take place on 27th August. Visit the website (https://leinsterrugbyreferees.ie/step-by-step-process/)  and drop Sean Gallagher (sean.gallagher@irfu.ie) an email for more information.