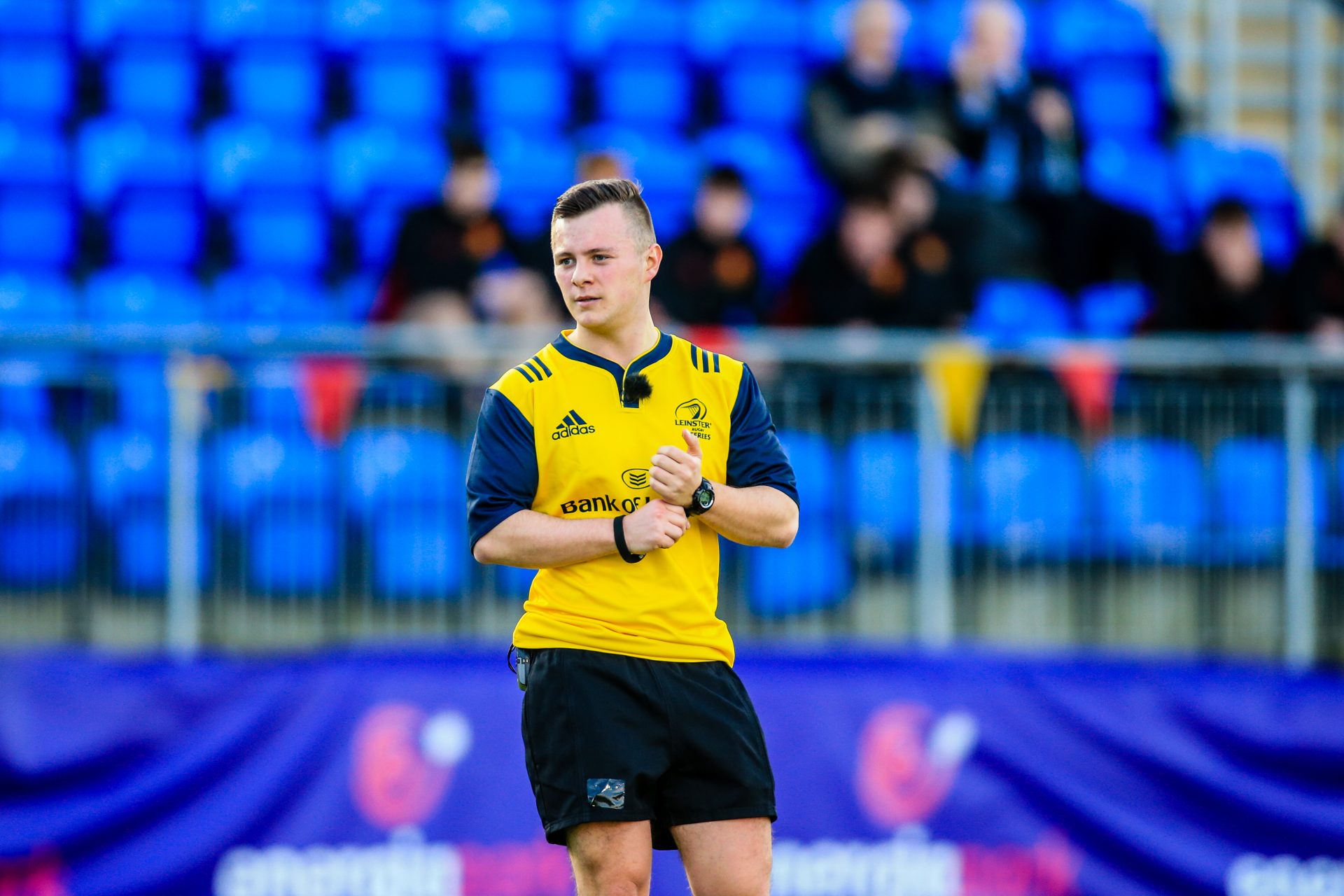 Welcome to another issue of Referee Corner.

A warm congratulations to our teams of officials from the recent schools cup finals. The team for the Senior Cup Final between Blackrock College and Gonzaga was Andrew Cole, with Paul Haycock and last minute replacement John Carvill. James Fegan and Keith Spendlove were the 4th and 5th Officials and Nigel Corell was TMO.

The team for the Junior Cup Final between St Michael’s College and Roscrea were Sam Holt in the middle, assisted by Paul O’Connor and Michael Forrestal. Well done to both teams on fine refereeing displays.

Ben McFarlane of Acme Whistles said “Through this partnership we continue to evolve and align ourselves with proactive & forward thinking organisations such as Leinster Rugby Referees. Playing our small part in the wider rugby community is one we take immense pride in, the role of the official, from Grassroots to Elite Level cannot be underestimated, and we are here to support and help in any way we can”

On the night our much anticipated annual awards are handed out. There are five main awards, one for lifetime achievement, one for referee of the year, another for refereeing performance of the year, one for the referee who progressed the most during the year and one for club of the year.

The lifetime achievement award is named after Ham Lambert who passed away a few years ago. Ham was an Irish cricketer, rugby union player and later international rugby referee. By profession a veterinary surgeon, he was noted for being the first in Ireland to own a practice devoted to the care of companion animals. This year’s winner was Peter Donnelly of St Mary’s College RFC who has devoted a number of years to the association. As well as being a former president of the association he is in charge of match ticketing, an unenviable task.  He follows a long line of winners including Brendan Jenkinson, Tom Aplin, Des McCabe,  and Brian Pender to name a few.

The award for referee of the year is named after Harold ‘Harry’ Ardill. Harry was instrumental in developing, recruiting and educating referees within Leinster. The referee of the year award accounts for both on field and off field efforts and contribution to the association. This year’s award went to long serving member and Honorary Treasurer Keith Spendlove. Keith officiates at all levels and is always there when needed, another tireless servant to the referees.

The Club of the Year award is named after Terry Doyle, former President of the association and was presented by his wife Deirdre. The award was named after Terry in 2011 and the first recipients were Edenderry RFC. This year’s recipients of the Terry Doyle Memorial Award were first time winners Coolmine RFC. In a tightly fought contest they came out above last year’s winner Greystones (2nd), and Terenure College (3rd). Other winners of this award include Old Wesley, Greystones, Terenure College, Lansdowne, Ashbourne, and Skerries. Coolmine were clear winners amongst the active referee population for both their captains and players attitudes and their off field facilities and welcome.

The Alain Rolland Referee Performance of the Year was won last year by Andrew Cole. Andrew had an even better season this year culminating in an International appointment and Schools Cup Final. This year’s winner was Robbie jenkinson. Robbie, a new national panel member, is a member of Skerries RFC and made his All Ireland League debut earlier this year, in a great match between Malahide and Blackrock, Robbie has progressed through the ranks over the last number of seasons and is thoroughly deserving of this award.

The last award of the night was the Denis Collins Perpetual Award for Progressive Referee. Presented by the great man himself, this award is for the referee who was seen to progress the most during the season, and has shown themselves to have put in time and effort into their own development. No one encouraged referees more in his time as referee administrator than Denis Collins. Last year Katie Byrne won the inaugural trophy. This years winner was Mitch Enderby. Mitch hails from Zimbabwe and became a Leinster Rugby Referee in 2017 and has made great progress since joining. He refereed this years Junior Cup game between St Marys College and St Fintans. We’re looking forward to seeing his future progression.

With only a few weeks left in the season we are immensely proud of the work that has been put in by referees at all levels this season and look forward to moving onwards in the 2022/23 season.