Who would be a Ref? The familiar cry in virtually all team sports has been heard in rugby circles down through the years but in some ways rugby is becoming one of the most attractive sports to referee in the world of sports.

At the dawn of professionalism the IRB recognised pretty quickly that for the game to move forward with these seismic changes referees would have to move forward with the times. Professional referees were needed and the various unions set about establishing National and international panels of referees. Today the IRFU has one of the strongest panels of the leading unions.

Many followers of other sports will often refer with envy to the respect referees receive on the field of play, the general lack of back chat, the respect afforded and the strong punishment handed down for players who don’t control themselves on the pitch. Throw in a professional contract and the opportunity to travel far and wide and you surely would have had huge numbers lining up to take up the whistle.

Well, not exactly. Refereeing numbers in Ireland are still dangerously low today and the IRFU are constantly looking more clubs to actively promote refereeing as a viable option among club members. They are also looking to introduce a younger age group to the benefits of refereeing on the international stage.

David Keane is 31 years of age, he played rugby up until the age of 17 when an injury ended his career. He wanted to continue his involvement with the game so took up refereeing at his school Clongowes Wood College and over 12 years later he finds himself travelling the world as a contracted referee.

“I begun my career just refereeing schools games and worked my way up from there. I refereed my first senior 1xv game when I was 21 and a year later I spent a summer referring in Australia which was a great experience and really helped my development as a referee.” 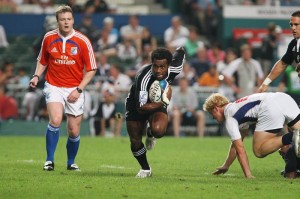 Keane is part of the panel of 15 contracted referees and is also a referee development officer with the IRFU. His job has taken him to as far flung places Windhoek in Namibia, Dubai in the United Arab Emirates and George in South Africa in the past year. He has refereed games in the Magners League, European Challenge Cup and as well as under 19, 21 and A internationals to date and feels that taking up refereeing with a view to becoming a international referee is a realistic and achievable goal with the right level of commitment.

“The national panel is always changing with new talented referees emerging every season. Ireland is recognised as one of the top countries in the world for producing referees and we currently have Alain Rolland and Alan Lewis referring internationally and Donal Courtney has just retired with Simon McDowell and George Clancy on the touch judge panel.”

In Dubai Keane refereed the international Sevens series final between South Africa and New Zealand and in Namibia he refereed the World Cup qualifier where the hosts defeated Tunisia to take a step closer to booking their place in the World Cup finals in France. Keane believes that refereeing is about trying to facilitate free flowing rugby and not looking to overly impose yourself on the game.

“ It’s a very enjoyable occupation. I believe the challenge for us is to make the game an enjoyable experience for players and supporters. To make sure the ball is freed up as much as possible and the game is allowed to develop. Thinking you are the most important person on the pitch is the wrong attitude all you can do is guide and facilitate not dictate.”

One of the new initiatives the IRFU have introduced over the past couple of years is the secondary school refereeing scheme which Keane as a development officer has been involved in organising. It is aimed at demonstrating to younger sports enthusiast the benefits of getting involved full time.

“ We have had 52 trainees from eight schools involved in the course this year and that is a huge success. Recruiting more young referees is a very important target for us and the new recruits are already refereeing under 13 &14 school games which is a tremendous experience for them.”

A more recent development in refereeing was the appointment of the first Irish female international referee. Aoife McCarthy, a school teacher from Dublin, made Irish rugby history when she was appointed to to referee in the FIRA-AER European Women’s Tournament which took place in Belgium in April. She is a member of the Leinster Rugby Referees  and has been refereeing for two years.

While this shows what can be achieved at the higher end of the game, Keane also believes that refereeing is just as fulfilling at all levels. “Most of the referees don’t do it with the aim of making it to international level. The majority want to be involved with the game at any level while also keeping themselves fit. That was why I started and it is still one of the main driving forces for myself and the majority of the refereeing fraternity in Irish rugby.”