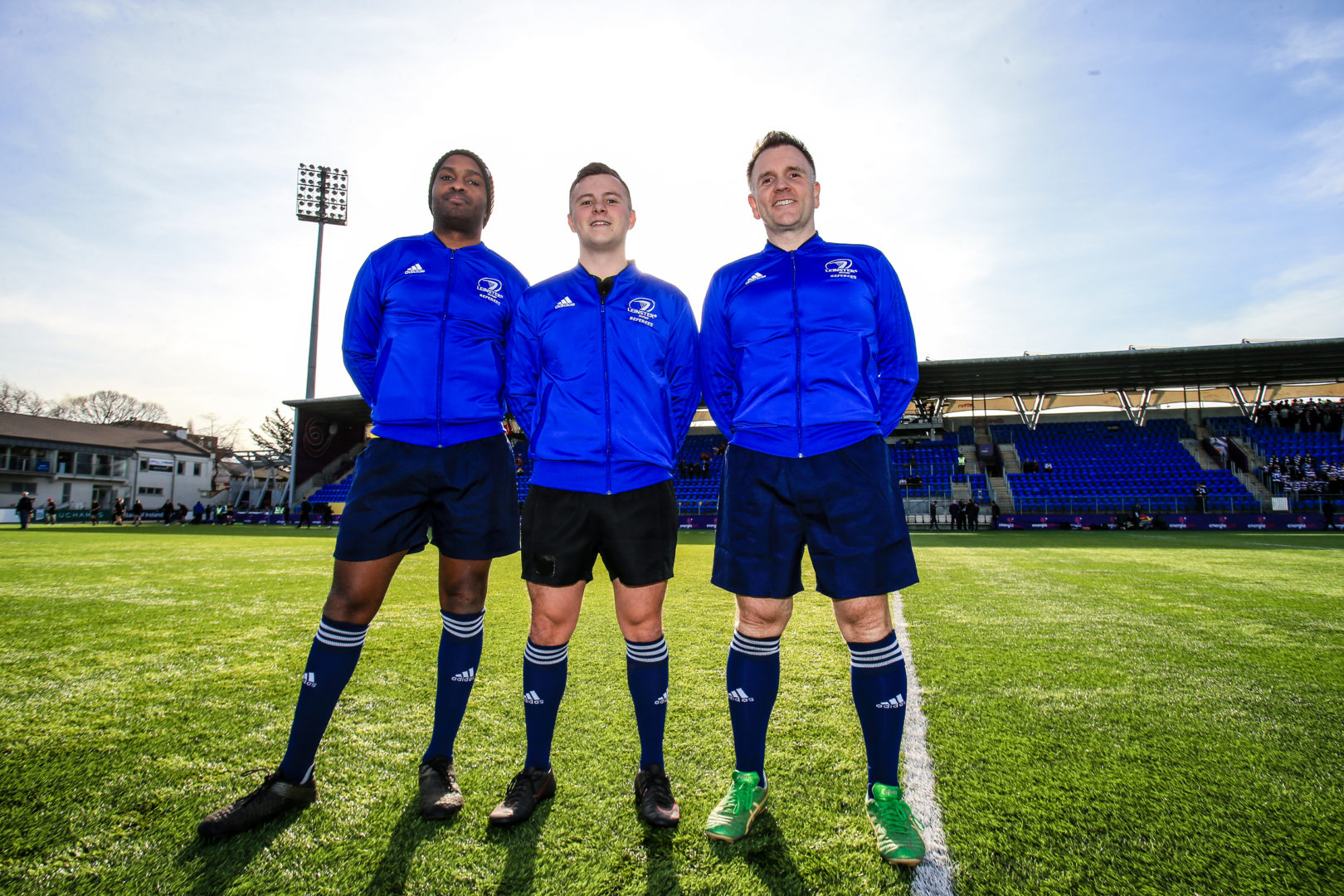 A warm welcome to another Referees Corner. It has been a few weeks since we have had a home game and we have had a busy few weeks in that time. Firstly a huge happy birthday to our most experienced referee, both in terms of referee experience and life experience. David Bell, President of the  ARLB in 1966, celebrated his 100th birthday on January 18th. We send our warmest congratulations and wish him happy health.

Our 2019/20 mid season seminar was held in the Green Isle Hotel on Thursday 23rd January, and was attended by over 100 referees from throughout the province. The mid season seminar is a great opportunity for referees to get together in an informal setting, to socialize and learn together. Such opportunities are rare and mainly limited to this seminar and our annual seminar in August.

The meeting was opened by Leinster Rugby Referees President Norman Carter, who welcomed the referees and assessor to the seminar. He thanked those involved in setting it up, namely the rugby committee and the admin committee under Paul Dolan. Norman stressed the importance of referee availability as we come to the “business end”of the season and thanked referees for their commitment. Norman introduced our first speaker – Steve Griffiths former World Rugby Referee Manager and subsequently World Rugby Technical Services manager.

Steve was present in his role as Development Group Manager Steve Griffiths. He gave a presentation on preparing for the unexpected citing many examples through video. In an interactive session he spoke through what makes a good referee and  what the behaviour of a good referee looks like talking through many examples of leadership behaviour for a referee. Assertiveness and communication were two key focus areas for referees and answering three key questions – why? What? and how? Steve went through a number of examples on video and invited referees to walk  through the decisions. A great session with plenty of takeaways for the referees.

Following  Steves presentation, Leinster Rugby CEO Mick Dawson was interviewed by Ciaran O’Brien and discussed the growth of Leinster rugby. Mick has been CEO  of Leinster since 2001 and seen many changes in that time from the prefabricated offices in Donnybrook, to Donnybrook village and now the great facilities in UCD. Mick oversees operations in Leinster Rugby which employees 193 people across many different  areas including our own Sam Holt and Hayley Whyte. Leinster Rugby is a happy environment with a key aim of growing the game in Leinster, which has certainly happened since 2001 when games were played in Donnybrook Stadium, now Energia Park. Mick aims to make the game more enjoyable for all, including referees, players, and supporters. Mick acknowledged the importance and the contribution of referees to Leinster Rugby’s success.

“Volunteers and referees have played a huge role in Leinster Rugby’s success. Without these volunteers we have no game and it is important that refereeing is seen as a viable alternative to playing and coaching in your club every weekend. Referees have an integral role in the running of our games at all levels, in schools, in clubs, in communities across the 12 counties. Indeed it is great to see Leinster Referees excel at the very top level of the professional game.”

Norman Carter closed out the meeting  and thanked all involved.

Our New Referee Course took place in Terenure College in January. The course was at full capacity and was facilitated by the IRFU Referee Department. ARLB Referee Katie Byrne spoke about her recent experience as a Trial Member and her journey on to the ARLB Development Group while ARLB’s IRFU Representative David McDonald was also present to welcome the new referees.

In total there were 20 attendees on the day who will now begin their adventure into refereeing.

Some of the topics discussed were:

ARLB President Norman Carter addressed those in attendance, welcoming them to their new hobby and making them aware of the supports in place.

“It’s great to see new referees coming on board. They will all have the full support of the ARLB in terms of mentoring and coaching as they go on their refereeing journey, so they will be far from alone. There are opportunities for referees to progress and officiate at the highest level, but most importantly, they get to enjoy the game from the best seat in the house,” he said.