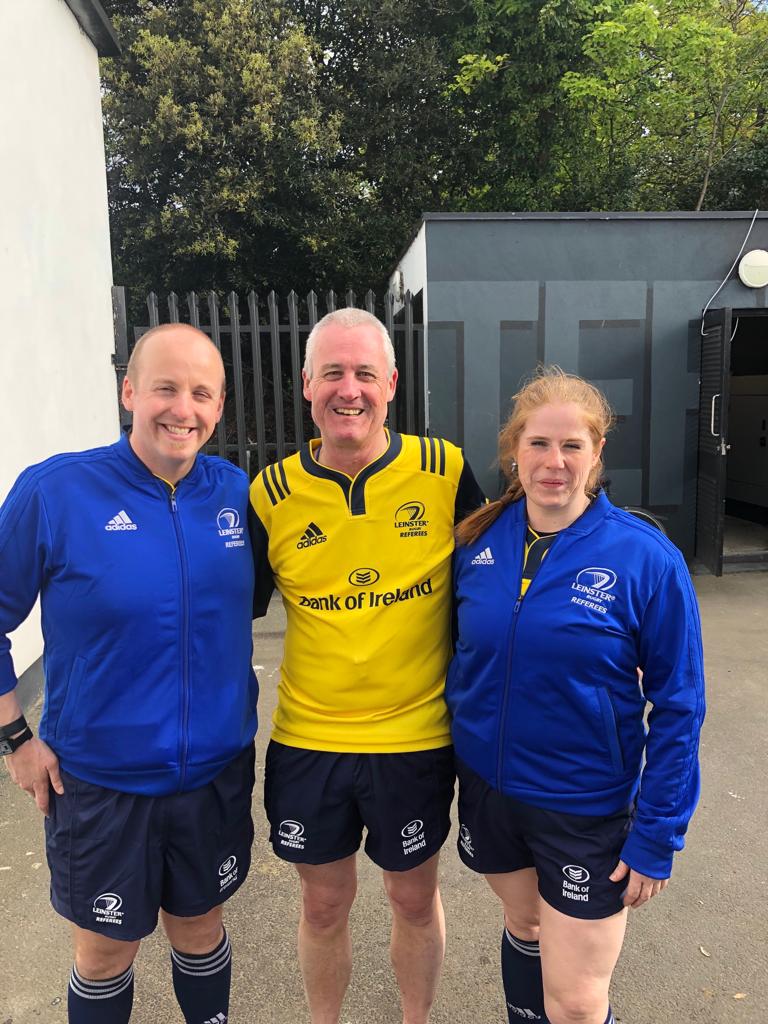 This article appear in the Connacht Match Program in January

The first home game of 2019 against Toulouse seems like a long time ago. We are going to take some time to look back at year 2019 in refereeing circles in what was one of our best years in our 115 year history.  Early in 2019 Sean Gallagher was appointed to the Women’s Six Nations Championship where he refereed France v Wales. He was also an AR on two occasions and had a great tournament. Sean is progressing well through the refereeing ranks. On January 26th we hosted our first new referees workshop, with over 30 attendees and it has been great seeing these referees develop over the year. Sean Gallagher (IRFU) presented an excellent introduction to refereeing and the various laws that go with it and he was ably assisted by Gary Glennon and Fiona Mallen. Bryan O’Neill, David Mc Donald and Denis Collins also joined in at various stages of the day.

Once February and March hit, things were in full swing with leagues finishing, cups starting and the schools cup season also hit. February saw our mid season seminar take place with Gordon D’Arcy as guest speaker. We also gave our much loved and visited website  www.arlb.ie a much needed refresh. Many thanks to Arthur Dupont of AD-Dev, John Montayne of Montimedia and ARLB PRO Dan Wallace for their hard work on the site. The annual dinner of the Leinster Rugby Referees is the highlight of our somewhat limited social calendar and is always a great event. It took place this year in Lansdowne FC on Saturday 23rd March and was hosted by Leinster Rugby Referees President Bryan O’Neill of Lansdowne FC.

On the night our much anticipated annual awards are handed out. There are four main awards, one for lifetime achievement, one for referee of the year, another for refereeing performance of the year and one for club of the year. This years winners were former Honorary Secretary Pierce Fitzpatrick, Robbie O’Flynn, Colm Roche and Old Wesley RFC – all deserving winners. We also congratulated Professor John Ryan who was made an honorary member of the Leinster Rugby Referees – we hope to see him out on the pitch soon.

At the end of the season, Norman Carter of Roscrea RFC was elected President of the Leinster Rugby Referee. David Robb became Senior Vice President and Gordon Condell was elected Junior Vice President. We wish them all a successful year in office. The 2018/19 season ended on a sad note for everyone involved in Leinster Rugby Referees and wider refereeing circles with the retirement of our Administrator, Denis Collins. We welcomed Hayley Whyte who has taken over from Denis as Referee Administrator and also welcomed Sam Holt as Referee Development Officer for Leinster. Sam is a member of Edenderry RFC. Both are doing tremendous jobs.

Last summer saw the Union Cup played in Dublin. The two-day festival of rugby was held in June, at Dublin’s DCU with 45 teams from 15 countries competing, making it the biggest Union Cup to date. A huge team of Leinster Rugby Referees and referees from the UK, Belgium, Netherlands and Germany organised by Tom Colton, Metro Area Rep, officiated at the tournament. Nigel Owens MBE was guest referee for the final.

Our 2019/20 season kicked off with our annual seminar held in St Mary’s College RFC in August. Thankfully we had excellent traffic management under the stewardship of James Fegan to help pack our 170 plus referees and assessors into Templeville Road. The day covered a number of interesting topics, including a presentation from the IRFU on refereeing standards and focus areas for the season and another superb presentation on how the Leinster Rugby Referees are going to operate in the future, including an explanation of a new Panel System for referees.

The following week over 30 new referees joined us in Terenure College for our first Recruits course of the season. Thanks go to Sean Gallagher, Sam Holt, Gary Glennon and Audrey Fulham amongst others for their excellent presentations and guidance to our new referees.

Referees provide a vital function in servicing all levels of the game. Refereeing is a fantastic hobby. Weather you have aspirations to referee at the highest level or referee underage rugby in your area the enjoyment factor and the benefits are great.

We look forward to a great 2020. The Leinster Referees always need more referees and opting to become one may be the best decision you’ve made for a long time. We will have a new recruit’s course on January 11th.