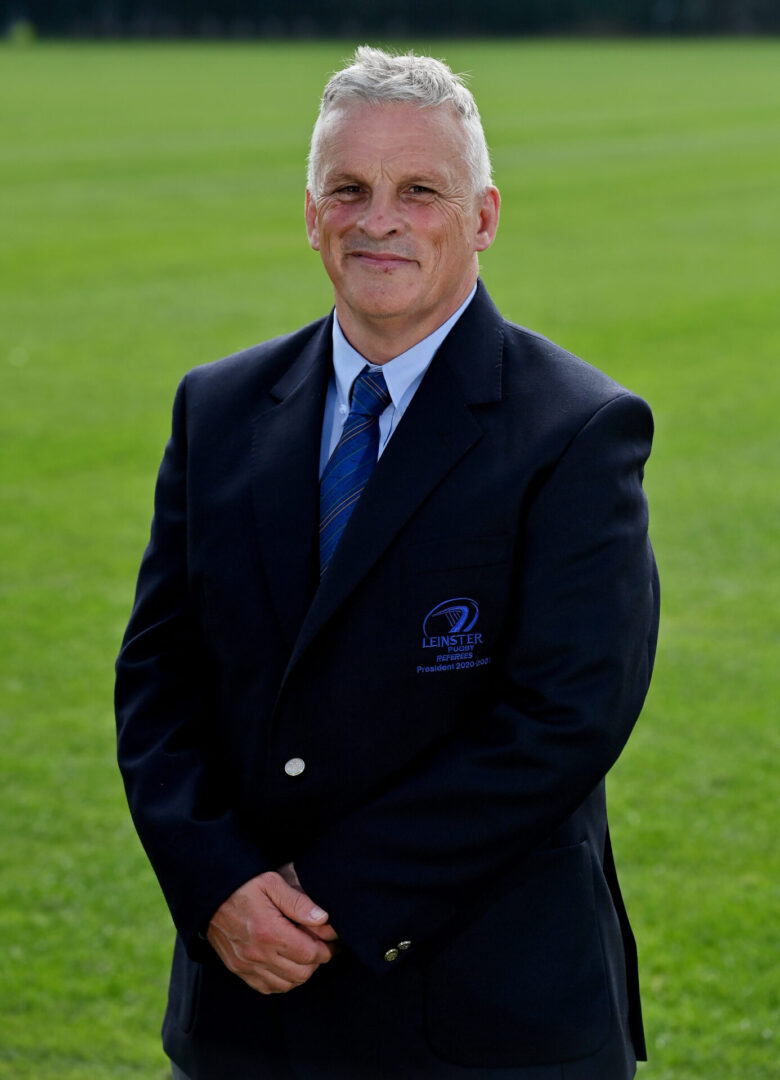 Happy Christmas and New Year to everyone. We hope everyone is enjoying the holiday  season. December and January would normally be a busy time for our referees but of course this year is different. We are looking forward to getting back on the pitch in the New Year. Good luck to Sean Gallagher and Brian MacNeice, and our more senior referees, who will be in regular action over the Christmas period.

In recent weeks, I took some time to catch up with the President of Leinster Rugby Referees, David Robb, to see how his year is going. Dave is a member of Railway Union where he is also a keen cricketer. Railway has provided two past presidents of the Leinster Association of Referees in Desmond Flanagan and Ciarán O’Brien, and this year Dave became Railway’s third president, a second in three years’.

The Robb surname may look familiar to Connacht supporters. Dave is father of Connacht centre Peter. I’m sure Peter is well versed on the laws of the game as a result. Dave has been a member of the ARLB for 23 years. He retired from playing and his neighbour, another ARLB stalwart and former IRFU referee Tony Redmond got him involved in refereeing. As well as refereeing Dave is an assessor (Evaluator) and has been Chair of Junior selection committee, ARLB Representative on the Leinster Competitions Committee and Junior Committee  and in the run up to his year as president was Junior Vice President and Senior Vice President.

Being close to being in the game and being able to give back was the more important aspect of why Dave took up refereeing. The Leinster Rugby Referees are, of course, more than just referees on the pitch – there are other roles can people get involved in, especially after their on field career including coaching, mentoring, assessing, touch judging, discipline and citing .

Of course there are pathways for everyone in Leinster, not just those who want to get to the National Panel. There are now about 7,000 games to be refereed in a normal season when you include Youths Womens and Mens Rugby. There is also 7’s rugby and there is also a need for Assistant Referees and Touch Judges for all competition levels.

Daves favourite referee when he was refereeing was probably Alain Rolland who he describes as the consummate Professional. Alain of course stepped down from his role as World Rugby’s high-performance 15s match officials’ manager earlier this year, a role which he held for 4 years.

How did Dave end up as President of the referees? He was asked by Norman Carter and Conor Byrne the then  Senior Vice President Junior Vice President and spent a couple of years on the referee committee doing the hard yards. What are his goals for the year as president? Before Covid there were two main goals – First to help develop the education and training side of things to assist Referees in their development and also to get to see as many Referees in action around Leinster as I could get to. Sadly the second is more difficult this season but Dave has done a great job assisting the development of referees in trying times.

Dave has simple advice for those referees setting out on their careers. Don’t be afraid to ask questions on any matter you are unsure about as everyone will learn from each other. It is also important to attend all the Area Workshops and Seminars and watch Referees on TV. Lastly but very importantly rehearse/role play what they will say in difficult situations e.g. Foul Play.

What would he like to see the Leinster Rugby Referees achieving over the next 5 years? Getting Referees to officiate at Internationals, Champions Cup and Pro 14 Games and to see all ARLB referees be the best they can be. Something that we would all like to see. Finally Dave has some simple advice for would-be referees thinking about taking up the whistle.  Take the plunge. There is great support these days from Mentors, Evaluators and Referees and talk to them and get involved in Whats App Groups  where there are comments about Match situations. May thanks to Dave for his time and we wish him well with the rest of his presidency.