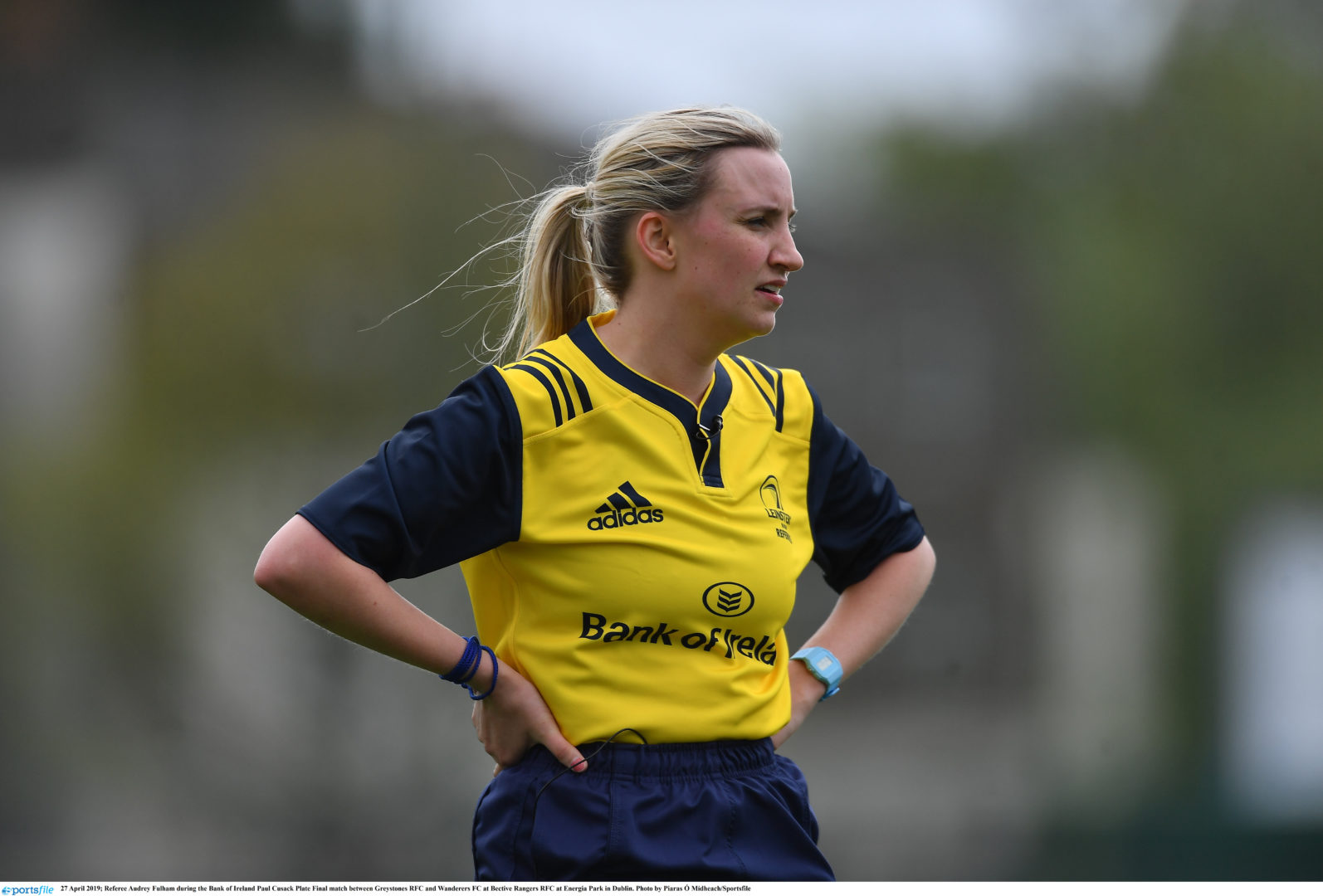 This article appeared in the Northampton Saints Match Day Program

A warm welcome to the Aviva stadium to today’s officiating team from the Principality of Wales. The man in the middle is Dan Jones. Like many referees, his former teacher at Whitchurch High School in Cardiff, Gwyn Morris, himself a referee, persuaded Jones to take up refereeing after a back injury curtailed his playing career.

He formed part of the original WRU referee academy with Ben Whitehouse and Craig Evans and joined them as a full-time professional in October 2018, to join Nigel Owens as the fourth full-time match official at the WRU. He is assisted today by Adam Jones, Dewi Phillips and Sean Brickell. We wish them the very best of luck and hope they enjoy their day in Dublin.

One notable thing this season is the amount of female officials that are coming through our ranks in Leinster and the large amount of women taking up the whistle around the globe. In Leinster we have been fortunate to have some great referees go through our ranks including Aoife McCarthy, who is currently on one the top touch rugby referees in Europe and Helen O’Reilly, former World Cup referee. Another referee making her way through the ranks in Leinster is Audrey Fulham. You can see her video on our YouTube channel or website. Here is her story in her own words.

Becoming a referee was one of the best decisions I’ve made. It was a big step for me. I went from being in a team situation when I played where I was always with my friends and teammates to what I thought would be a very lonely hobby. I couldn’t have been more wrong.

I have made so many amazing friends in the 15 months I’ve spent refereeing. There is ample opportunity to get out there any meet other referees. Events such as the annual dinner, pre-season and mid-season seminars and monthly meetings give you the chance to meet and catch up with other referees. There is also referee-specific training twice per week in clubs around Leinster for those who don’t want to train alone.

I have had an endless supply of love and support from my club, Tallaght RFC and I am also surrounded by so many amazing female referees such as Susan Carty, Fiona Mallon, Katie Byrne, Helen O’Reilly (to name a few). These women are some of the most inspiring and down to earth people and it’s such a pleasure to share this platform with them.

I was delighted to hear recently that there are now 11 female referees, including trial members, within Leinster Rugby Referees, and I would love to see this number increase over the coming seasons.

Being a woman in a traditionally male role is never easy but the Leinster Referees Association have been so welcoming and inclusive. I have never felt out of my depth or excluded in any situation. But it is so important to get more women involved in all areas of our great sport and while we are certainly lucky to have 11 fantastic women on board, we are always looking for more women to join the association and give them any support they need. More inclusivity makes for a better sport and seeing women in traditionally male roles helps to break down barriers, which is so important in 2019.

My hobbies throughout school and college were all focussed around music. Once I left college, I decided to play rugby, even though the only experience I had was watching rugby on tv, and from there I began refereeing. You don’t have to be sports-mad or already heavily involved in rugby to give refereeing a go. Becoming a referee has opened up a whole new world for me. Coming from a non-traditional rugby background it has taken time to understand the dynamics of the domestic game and get to know each club, their coaches, their Presidents and players too. It has all been worth it.

There will always be a need for referees at all levels and I would encourage anyone to pick up a whistle and give it a go. It may be the best decision you’ve ever made!

My refereeing journey is only in its infancy and has already brought me so much positivity, friendship, fitness and knowledge to my life. I look forward to continuing this journey and see where it takes me.

Have you got what it takes? The Leinster Referees always need more referees and opting to become one may be the best decision you’ve made for a long time. We will have a new recruit’s course on January 11th.