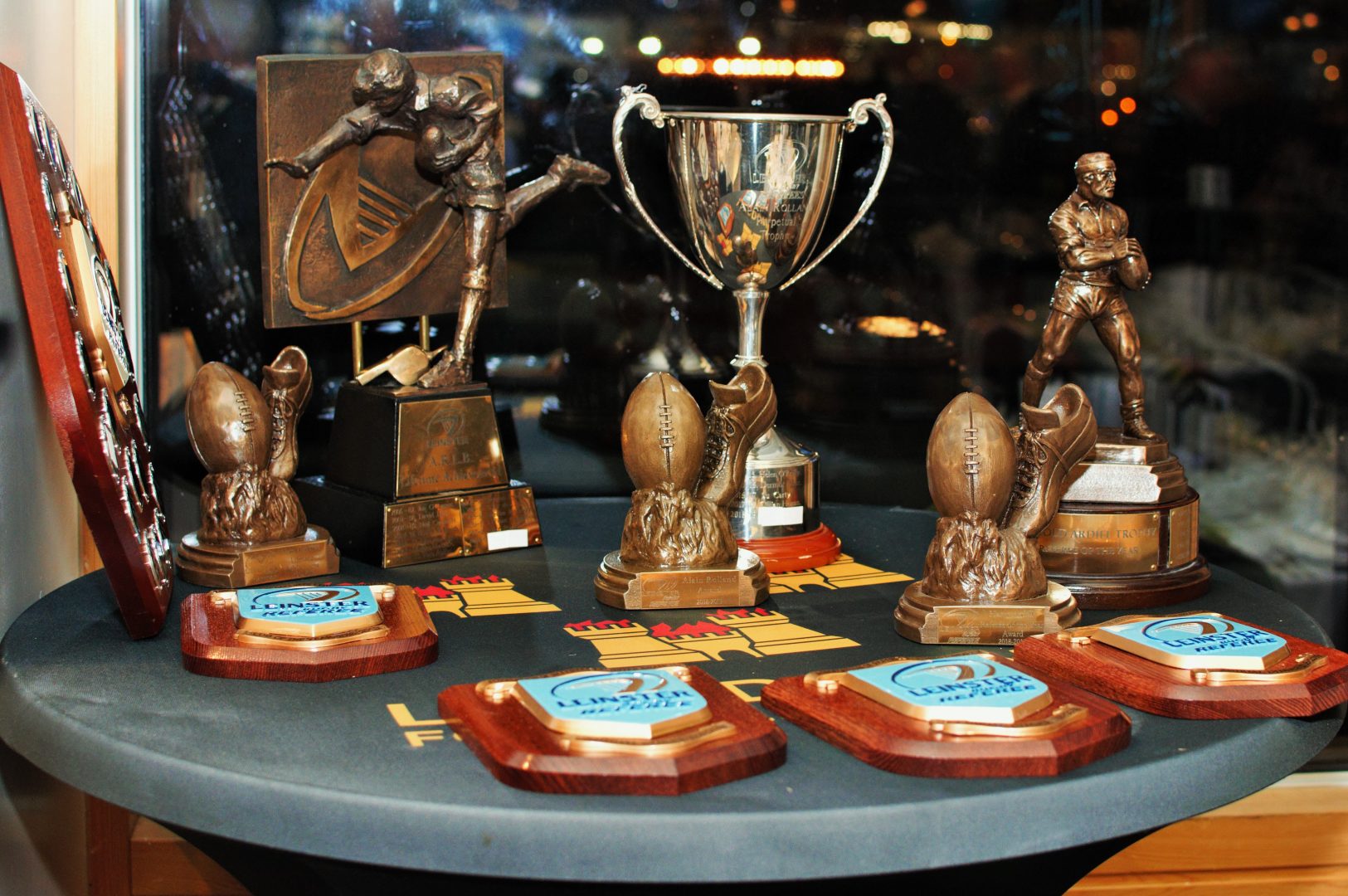 Welcome to another issue of Referee Corner and of course a warm welcome to Referee Romain Poite (France) Assistant Referee: Pierre Brousset (France) Assistant Referee: Vincent Blasco Baqué (France)  and TMO: Denis Grenouillet (France). Romain is no stranger to the Aviva or indeed Leinster. Romain was the man in the middle for the 2010-11 Cup Final when Leinster came back from a substantial half time deficit to win their second Heineken Cup final. It is great to see Romain back in the RDS, a true gentleman of rugby refereeing.

A large gathering of provincial presidents, referees, assessor’s guests and friends attended the evening which was organised by the Referees Administration committee under Simon Owens and Wayne Sheridan, and of course Denis Collins, Lorcan Balfe President of Leinster Rugby. Lansdowne First XV coach Mike Ruddock OBE was guest speaker. Previously, Ruddock was the coach of the Welsh national rugby union team from 2004 until February 2006 and Leinster Coach from 1997 to 2000. He is the father of Irish rugby union international Rhys Ruddock. In 2004, Mike was appointed to the Welsh job. In his first season, Wales completed the Grand Slam in the Six Nations Championship for the first time since 1978. He received an OBE in the 2006 New Years Honours List.

On the night our much anticipated annual awards are handed out. There are four main awards, one for lifetime achievement, one for referee of the year, another for refereeing performance of the year and one for club of the year. The lifetime achievement award is named after Ham Lambert who passed away a few years ago. Ham was an Irish cricketer, rugby union player and later international rugby referee. By profession a veterinary surgeon, he was noted for being the first in Ireland to own a practice devoted to the care of companion animals.

This year’s winner was former Honorary Secretary Pierce Fitzpatrick who has devoted a number of years to the association. He follows a long line of winners including Norman Camier, Brendan Jenkinson, Tom Aplin, Des McCabe,  and Brian Pender to name a few.

The award for referee of the year is named after Harold ‘Harry’ Ardill. Harry was instrumental in developing, recruiting and educating referees within Leinster. The referee of the year award accounts for both on field and off field efforts and contribution to the association. This year’s award went to long serving member Robbie O’Flynn. Robbie officiates at all levels and is always there when needed, another tireless servant to the referees.

The Club of the Year award is named after Terry Doyle, former President of the association. The award was named after Terry in 2011 and the first recipients were Edenderry RFC. This year’s recipients of the Terry Doyle Memorial Award were Old Wesley RFC. In a tightly fought contest they came out above last years winner Greystones (2), and Wicklow (3). Other winners of this award include Greystones, Terenure College, Lansdowne, Ashbourne, Skerries, Edenderry, Malahide and UCD. Old Wesley have been there or there about in voting for the last number of seasons and deservedly won the award last year. This year they went and won it again, the first club to win back to back awards. After 88 votes were cast, they came out with a quarter of the votes. One wonders if there is a Wayne Sheridan effect doing the rounds.

The final award that is handed out is the Alain Rolland Referee Performance of the Year which was won last year by Susan Carty. This year’s winner was Colm Roche. Colm, an AIL panel member, was joined by his father at the dinner and is also a member of Lansdowne FC and international 7’s official.

With only a few weeks left in the season we are immensely proud of the work that has been put in by referees at all levels this season and look forward to moving onwards in the 2019/20 season.

Do you think you have you got what it takes to be a referee? The Leinster Referees always need more referees and opting to become one may be the best decision you’ve made for a long time. Feel free to make contact with the Leinster Rugby Referees at denis.collins@leinsterrugby.ie or contact by phone Denis Collins at 01-2235107 or David O’Brien at david.obrien@irfu.ie