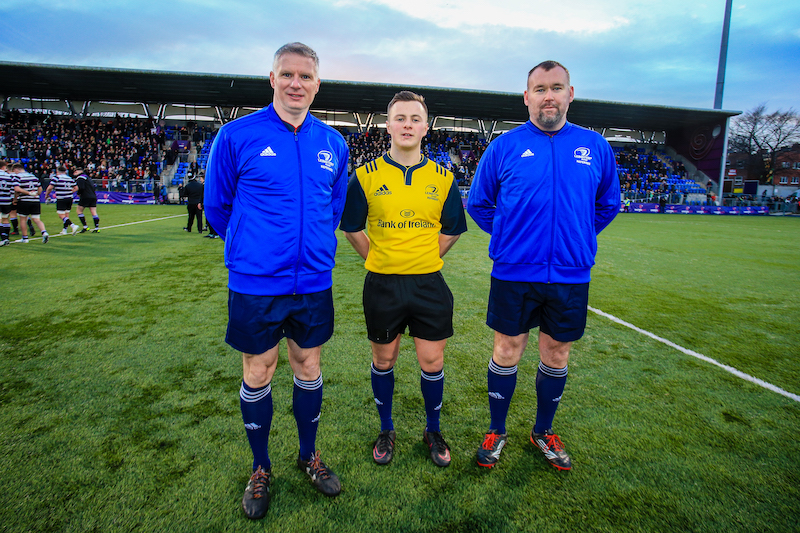 Welcome to another edition of referees corner and a warm helo a chroeso to Nigel Owens MBE and his team of Frank Murphy from Munster, Colin Stanley in the TMO booth and Michael Carroll of Leinster is assessing. Nigel regularly writes articles for Wales Online, the most recent one here https://bit.ly/2GHKIhf is both educational and hilarious as he tells Eddie Jones he was refereeing Wales v England. He articles are a great read and worth subscribing to for little refereeing titbits. We wish Nigel and team well today in what is sure to be a bruising encounter.

Also worthwhile looking at Nigel’s pre match comments to players from a game a few weeks ago – https://bit.ly/2E4VJVW – also on our facebook page.  We would love to see more of this and well done to TG4 and Nigel for the footage.

The SCT Bank of Ireland Challenge Cup is rolling into the Semi Final phase. It has been great to see so many games on television, especially giving our referees exposure to high quality televised games. We are immensely proud at the work and effort they have put in. Congratulations to Dermot Blake who will referee the Semi Final between Clongowes Wood College and Gonzaga and to Nigel Correll (assisted by John Carvill and Tom Colton) who will referee St Michaels and Blackrock College in the other Semi Final. Both games place in Donnybrook Stadium.

With all that, Who would be a ref?

Who would be a Ref? The familiar cry in virtually all team sports has been heard in rugby circles down through the years but in some ways rugby is becoming one of the most attractive sports to referee in the world of sports.

At the dawn of professionalism World Rugby recognised pretty quickly that for the game to move forward with these seismic changes referees would have to move forward with the times. Professional referees were needed and the various unions set about establishing National and international panels of referees. Today the IRFU has one of the strongest panels of the leading unions and announced earlier this year made the move to reward seven referees with professional contracts. The referees will receive dedicated coaching, analysis and support for their strength & conditioning and nutritional needs. Many of these referees were already IRFU staff. World Rugby’s refereeing department is current managed and guided by former Leinster and Ireland referee Alain Rolland.

Many followers of other sports will often refer with envy to the respect referees receive on the field of play, the general lack of back chat, the respect afforded and the strong punishment handed down for players who don’t control themselves on the pitch. Throw in a professional contract and the opportunity to travel far and wide and you surely would have had huge numbers lining up to take up the whistle.

Well, not exactly. Refereeing numbers in Ireland are still low today and the IRFU are constantly looking more clubs to actively promote refereeing as a viable option among club members. They are also looking to introduce a younger age group to the benefits of refereeing on the international stage.

How does the process work once someone signs up?

Have you got what it takes? The Leinster Referees always need more referees and opting to become one may be the best decision you’ve made for a long time.

Feel free to make contact with the Leinster Rugby Referees at denis.collins@leinsterrugby.ie or contact by phone Denis Collins at 01-2235107 or Sean Gallagher at sean.gallagher@irfu.ie