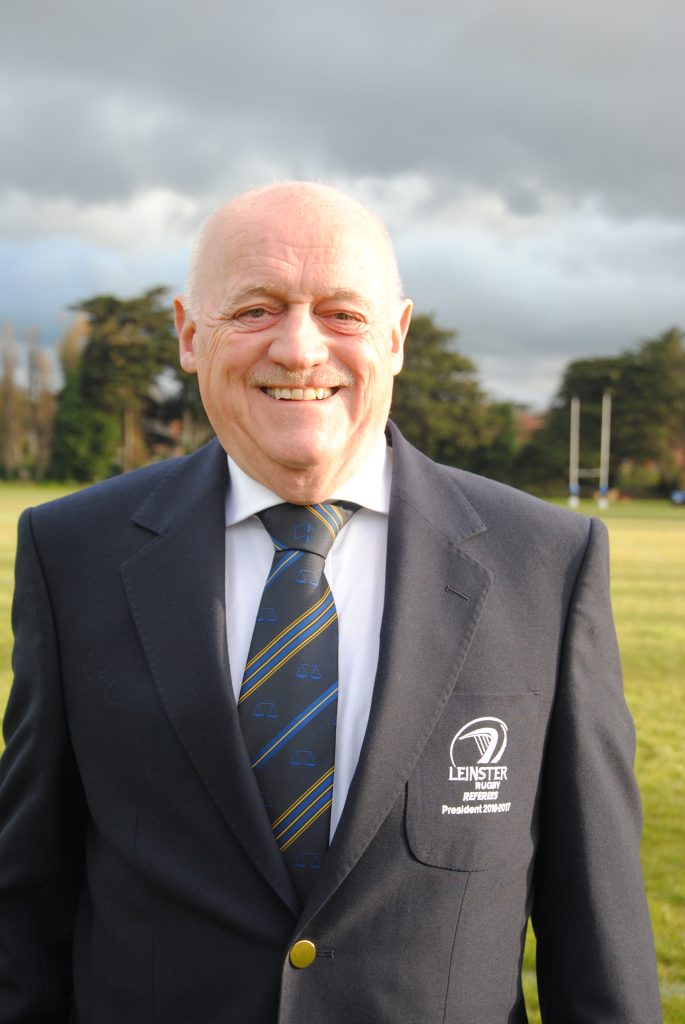 I am honoured to be elected President of the Association of Referees Leinster Branch for 2016/17.  This honour is magnified by my appreciation of my own mediocre career on the pitch.   Hopefully I have made, and will continue to make, a more valuable contribution off the pitch.

There are many people to thank for helping me to get to this point, but I should go back to where it all started, with my friend and fellow club man at Seapoint, Denis Collins.  Denis got me started in the Association at the tender young age of 49, and 6 years later, after a couple of minor heart attacks, I confined my refereeing to under age games.  Shortly thereafter, Denis suggested that I become involved in the management of our Association, a role that I have enjoyed almost as much as active refereeing.  I have had the privilege of working closely with our last 6 Presidents, and have learned a lot from them.

I inherit the Presidency of a club which is in a very good place.   This has been achieved over several years, not only by the stewardship of strong Executive Committees, but also the excellent work done through the Standing Committees, covering Management, Rugby, Finance and Administration, as well as the unfailing commitment of the Area Representatives.

Our President 2015/16, Wayne Sheridan, has been rightly complimented on setting a high bar for future Presidents. Personally, I would have found it a bit less daunting if he had set it somewhat lower! One of his many contributions was to convene a “think tank” meeting earlier this year, with the objective of discussing how we could continue to improve as an Association, and as a club.  So, when we were asked by the Leinster Branch to produce a 5 year plan, we were well positioned to do so.  The plan can be downloaded from here https://leinsterrugbyreferees.ie/?page_id=288, and I encourage all members to read it, and become involved in the debate of how the ARLB should develop and improve.

We have documented how we intend to deliver on our vision of supporting the global development of the game of rugby union.  We strive to do this by providing the best possible match officials at all levels whilst providing ambassadorial skills off the pitch. Given that we are already running successfully, the theme running through the plan is one of continuous improvement. As an outcome, we have identified 3 key projects for the first year, which we need to resource and deliver upon.

I look forward to working with you all in the year ahead, and if when I leave office in 12 months, your club is in a slightly better place, then I will have earned the trust that you have shown in me to date.