Happy New Year!!! 2016 promises to be another great year of rugby and a great year for the Leinster Rugby Referees. Here’s hoping some of our refs may make an Olympic debut in Rio whilst others may continue to climb the ladder towards the top. 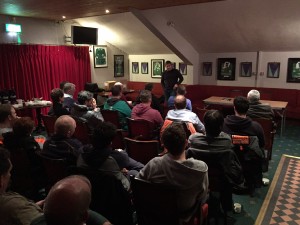 Leinster Rugby Referees held ‘An Evening with Alain Rolland’ in Clontarf FC on Tuesday 8th December organized by PRO Dan Wallace and Metro Representative Thomas Keating. Alain has had a hugely successful refereeing career – a World Cup Final, Heineken Cup finals, countless European games and of course 40 plus Leinster and 3 Irish caps. Alain spoke about his rugby career, his accidental move into an amazing refereeing career and his life, as portrayed in his fabulous book – The Whistle Blower: The Alain Rolland Story. Alain kindly began the evening by meeting with the new trial referees. He answered many questions covering the breakdown, materiality, positioning, and the balance required by a referee between being vocal and not speaking at all, something which he mastered throughout his refereeing career.  He imparted key tips on the scrum from his experience to assist the trial referees in seeing the telltale signs of problems with the scrum amongst other things. This was invaluable experience for the trial referees to tap into a referee who has seen it all and refereed at the very top of the game, most notably the World Cup Final in 2007.

Alain then held an open talk with members of the Leinster Rugby Referees, and proceed to talk about his career in rugby and his life and he gave some excellent insights. 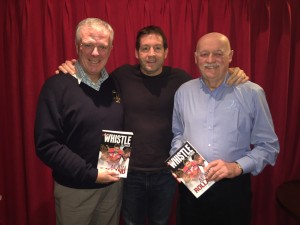 He started off talking  about how he became a referee, which was an accident; he was down in Stradbook, home of Blackrock College RFC, when the referee that was appointed for the Third A game failed to turn up, and he was asked to referee the game, a game that would lead him eventually to referee the World Cup Final.

Alain went on to speak about how he progressed up through the ranks, and did that quickly, literally within 3 years he was refereeing his first international test match in Wales. 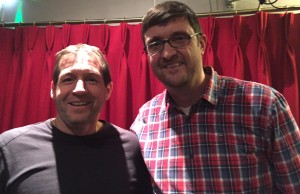 Alain finish his career by refereeing the Heineken Cup final of 2014 between Toulon and Saracens. He talked about how he prepared for the games and the commitment a referee needs to give, especially to a World Cup competition, a referee can be away up to 57 days from home. Alain’s most memorable game he refereed was South Africa v New Zealand in Pretoria in 2003, for him this was a game where New Zealand played the “complete” game of rugby, running out 54-16 victors.

Alain went into many other stories and comical moments in his referee career, not to spoil it, you can read all about it in his book. He spoke about how fortunate it was for him to get the opportunity to referee, Leinster v Munster back in 2014 in the Pro12, it was another case of the referee assigned not being able to referee the game, and there was Alain again, just like when he started his career in the right place at the right time.

Following a lengthy Q&A session with those that attended, Alain closed the evening with a fitting tribute to Jonah Lomu (1975 – 2015), remembering back when Jonah was playing in the Sevens Rugby, in particular in Hong Kong when the New Zealand played Fiji in the final, and how the full back from Fiji team allegedly said prior to the game that Jonah was “average”, well when Jonah was faced with only the try line and the full back, he proceeded to go through the full back, score the try and even have the time on the way back to ask “How average was that?” to the full back as he lay prone on the ground!

Many thanks to Alain for giving up his time, something which he continually does for the Leinster Rugby Referees. He is a referee that is sorely missed, by most, on the pitch, but is still educating referees at the highest level. 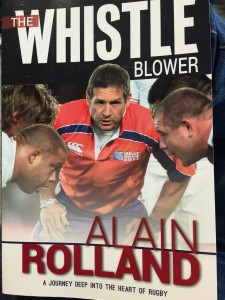 His book is The Whistle Blower: The Alain Rolland Story available in all good bookshops in case Santa forgot to deliver!!!