This article appeared in the Castres match day program

The Leinster Rugby Referees season is back in full swing after the summer break. The season kicked off with our annual seminar on August 21st in Old Wesley RFC’s splendid new clubhouse. 180 plus referees attended the day,our largest attendances to date showing the increase popularity in refereeing within Leinster and the excellent work done by the IRFU Recruitment officers and area representatives.  David MacDonald, President of the Leinster Rugby Referees, and Old Wesley member opened proceedings, welcoming the referees to another season and wishing them well. 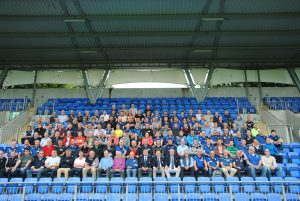 We were delighted to welcome back Sean Gallagher, a Leinster referee currently working in Connacht as the IRFU Development Officer there. Sean conducted the pre-Season presentation and the key points and focus areas for referees this season including the new law changes for the season. These include Rugby Values – Players appealing for decisions, playing acting, diving or displaying un-sportsmanlike behaviour must be sanctioned / managed.  Players exaggerating an offence may have that penalty reversed and simulation should be penalised as a minimum. These facets are something we have seen throughout the rugby world cup. A full list can be found on our website www.arlb.ie

Tom Aplin and John Montayne talked the referees and assessor through the new IRFU Assessment form which aims to bring more clarity to referees on their assessments. Peter Bracken and Nigel Correll then spoke through scrummaging. Peter has represented Ireland at Youths, Schools, Ireland development and Ireland A level. Peter toured with the Ireland senior squad to New Zealand and Australia in 2006. Peter has a scrum coaching business called ‘thescrumdoctor’. Both gave a very interesting insight into scrummaging and Nigel spoke through the key points to look out for, for referees.

Kevin Beggs then spoke through video analysis, the benefits to the referee and how they can better use it. A number of our referees are videoed throughout the season by our video analysis team. This provides referees and assessors with the ability to review and analyse the game. Following the seminar a number of referees took part in fitness testing under the watchful eye of Paul Haycock. Paul has developed a thorough fitness program for our referees. Needless to say, they all passed.

Then the annual mass scramble for new kit came at the end of the day – many thanks to Dan Wallace for organizing all the kit and to Simon Owens, Denis Collins, Tom Keating, and Wayne Sheridan for all their help in distributing. Also many thanks to our sponsors Bank of Ireland and Canterbury for their continued support.

September and October sees the start of the area meetings across Leinster. The province is broken into five areas for refereeing – North East, North Midlands, Midlands, South East and Metropolitan. Each area has an elected representative who manages the referees and new members in his given area. Each month the areas have their own meetings amongst their members. This month saw the focus remain on the key refereeing points for the season which, for those interested are on our website. Rather than re-hash previous presentations the meetings were more of an open discussion on these aspects. The meetings were facilitated by David O’Brien of the IRFU.

This season the IRFU’s Referees Department will place a renewed focus on existing foul play laws to remove illegal and dangerous collision based contact from domestic competitions in Ireland.

The areas of focus centre on foul play at the tackle, the breakdown and off-the-ball contact.  These offences will be upgraded to penalties and yellow or red cards depending on the severity of the incident.

The aim of this initiative is to soften the impact of the tackle and ruck or maul entry by removing should first or shoulder only contact. i.e. shoulder charging with no attempt or a late attempt to wrap arms upon contact.  There will also be a renewed focus on protecting players in vulnerable or prone positions in rucks and mauls.

The law interpretations will be enforced in all competitions from U13 age grade through to the Ulster Bank League. Under the umbrella of the Ref SMART programme a series of instructional videos have been produced to inform coaches and players of the illegal actions that will be clamped down on this season.  These videos are available online atwww.irishrugby.ie/rugbysmart.