This article featured in the WASPs Champions Cup Program

A very warm welcome to the first Champions Cup home game of the season. Best wishes to Leinster as they embark on a journey to bring back a 5th star. A warm welcome also goes to Romain Poite and his team of officials for today’s game. Romain was the man in the middle for the 2010-11 Cup Final when Leinster came back from a substantial half time deficit to win their second Heineken Cup final. It is great to see Romain back in the RDS, a true gentleman of rugby refereeing. 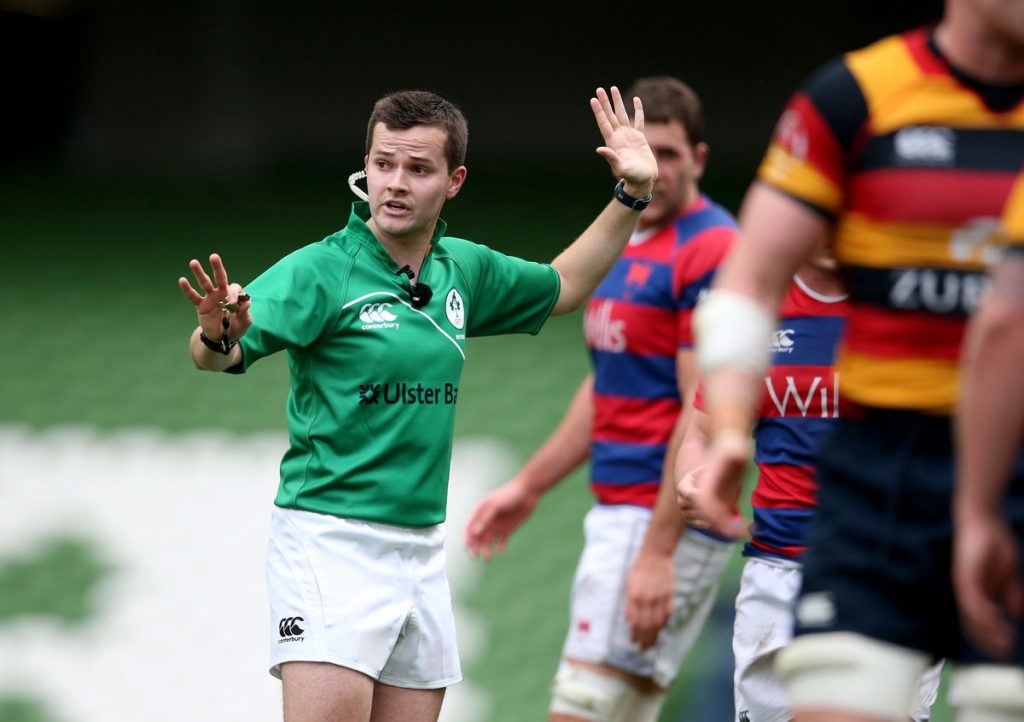 Another true gentleman of refereeing, a little closer to home, is Sean Gallagher. I refer of course to Sean Gallagher, Navanman and Leinster Referee and not dragon and Presidential hopeful. Sean may have fallen into refereeing in somewhat bizarre circumstances but it quickly became a passion which he has followed all the way to the top. The former secondary school teacher was only made a full-time referee in October 2017 but has been cutting his teeth as a rugby official for a number of years. I was lucky enough to come through the IRFU system beside Sean and then watch him forge ahead. Sean was a fresh-faced (he still is) 15-year-old ready to watch Navan play County Carlow when the referee’s car broke down and he was thrust on to take charge of the Anderson Cup semi-final. I was less fresh faced. Sean currently works as the IRFU Referee Development Officer for Leinster. Thankfully he took a few minutes out of his busy schedule to answer a few questions for us.

1. Sean, what made you decide to take up the whistle?
I returned to Navan Rugby Club one afternoon, having played a match against Bective Rangers in Donnybrook. The Thirds were due to play an Anderson Cup match against Country Carlow, but received a call to say the referee’s car had broken down and he couldn’t make it. The coaches were trying to find a replacement referee and I reluctantly agreed to take up the whistle. I really enjoyed the game and decided to give refereeing a go.

2. How long are you refereeing now?
That was fourteen years ago!

3. What is the process like to become a referee?
The Association of Referees Leinster Branch (ARLB) has a fantastic process in place for those who want to start refereeing. Anyone interested can contact the IRFU Provincial Referee Development Manager and register for the New Referees Course. It’s a one day event that covers the basics of refereeing. This is followed up with four technical workshops on the key areas of the game. In their initial stages of development, new referees will officiate age grade matches, with an experienced mentor in attendance to advise and coach them.

4. You are now a full time professional referee, has your approach to refereeing changed since you became full time?
I was a secondary school teacher prior to becoming a full time professional referee. I wouldn’t say my approach to refereeing has changed, but being able to focus solely on refereeing makes a huge difference. I’m now able to spend more time preparing and reviewing matches which results in stronger performances on the pitch.

5. What does a typical week look like for a full time referee?
It depends completely on the time of the season, although this week is a particularly busy one. I refereed Scarlets v Southern Kings last weekend and spent Monday reviewing the match and the other Guinness Pro 14 games that took place. I was in Paris on Tuesday and Wednesday for the EPCR Match Official’s Camp to prepare for the Champions Cup and Challenge Cup that are starting soon. Then it’s straight to Belfast on Friday to run touch for Andy Brace who is refereeing Ulster v Connacht.

6. What is your training regime like?
The game is faster now than ever. There’s more to it than looking physically fit, referees need to make accurate decisions, in high pressure situations, under fatigue. The IRFU provides me with access to a strength and conditioning coach who monitors my fitness. I train every morning and usually do two weights sessions in the gym, one speed session on the pitch and a high intensity running session each week.

7. What is your role within the IRFU and Leinster?
I am currently acting as the IRFU Provincial Referee Development Manager in Leinster. The ARLB have referees operating at all levels of the game and my job is to assist them in managing and educating their members. This could involve running a workshop for our new referees who are just beginning their careers, to coaching our IRFU National Panel referees who officiate in the All Ireland League.

8. What one law would you like to change or introduce?
There is one law that always irritates me – and the players. When the attacking team knock on over their opponent’s goal line and the ball is grounded by a defending player, in law, we must award a 5 metre scrum to the defending team. Why not offer the defending team the option of a 22 dropout and get on with the game!

9. What will make one improve as a referee?
There are two simple ways to improve as a referee. Firstly, watch our top referees in the professional game and see what they are doing. Look at their positioning, movement and communication, as well as their technical decision making. Secondly, get out on the pitch and referee as many games as possible. The best way to learn is through experience.

10. What advice would you give to someone thinking about taking up refereeing?
Just give it a go. To receive information about upcoming courses, check out www.irishrugby.ie or send me an e-mail on sean.gallagher@irfu.ie.
Many thanks to Sean for his time.

The Leinster Referees always need more referees and opting to become one may be the best decision you’ve made for a long time. Feel free to make contact with the Leinster Rugby Referees through Sean at Sean.Gallagher@irfu.ie