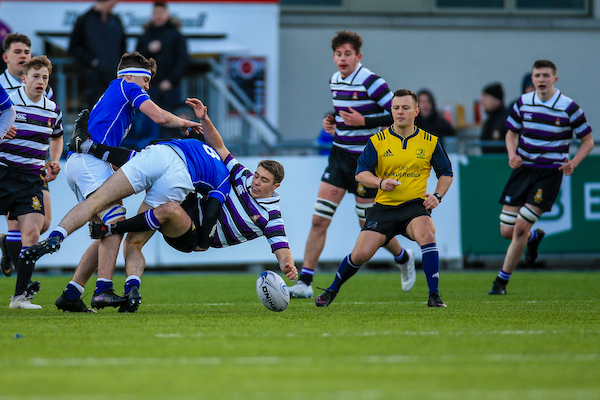 We’ve been running a series of law question polls over on our facebook page. Here and the questions and answers:

October 4th Friday: Advantage may be played if the ball is available for continuity of play inside the scrum when the scrum collapses. True or false?

False: Law 19: If a scrum collapses or if a player in the scrum is lifted or is forced upwards out of the scrum, the referee must blow the whistle immediately so that players stop pushing.

October 3rd Thursday: At a drop-out, a player from the opposing team charges over the 22 metre line before the ball is kicked. What should the referee rule?

Free Kick: Law 12 An opponent must not charge over the 22-metre line before the ball is kicked. Sanction: Free-kick.

October 2nd Wednesday: A scrum is formed with its centre line just outside the 22. The defending team feed it and win the ball. The scrum half, who is standing inside the 22, kicks the ball into touch on the full. Where is the place of the lineout?

Opposite the place it was kicked. Law 18: Touch, quick throw and lineout –

October 1st. Tuesday: Advantage may be played if the ball comes out of the tunnel at a scrum without having been played. True or false?

False: Law 7: Advantage – The ball comes out of either end of the tunnel at a scrum.

September 30th: The No. 8, who usually pushes on both locks, decides to push on a lock and a flanker. Is this allowed?

Yes: Law 19: Scrum – All other players in the scrum bind on a lock’s body with at least one arm.

September 20th: Dragging a player out of a maul is legal if that player has the ball. True or false?

September 19th: A team has indicated to the referee an intention to kick at goal but then takes a tap kick and runs with the ball. What action should the referee take?

September 18th A tactically replaced player may return to play in the match to replace a player with an open wound or for an injured front row player. True or false?

September 14th When forming a scrum all players not in the front row must bind on a lock forward. True or false?

True: Law 19: Scrum – All other players in the scrum bind on a lock’s body with at least one arm.

September 13th. Advantage may be played if the ball touches the referee but then goes back to the same team who previously played it. True or false?

False. Law 7.3a The ball or a player in possession of the ball, touches the referee and an advantage is gained by either side.

September 12th To be described as ‘brought to ground’, a ball carrier must have both knees on the ground. True or false?

False. Law 14.2 Being brought to ground means that the ball-carrier is lying, sitting or has at least one knee on the ground or on another player who is on the ground.

September 11th An attacker is tackled by a defender and a ruck is formed over the two players on the ground. The tackler remains on the ground and plays the ball with a foot. What should the referee rule?