Last weekend a little bit of history was made for Ashbourne Rugby Club, North East Rugby and Leinster Rugby Referees.

A team of ARLB members, made up of Sean Gallagher (Navan RFC) officiating as AR1, Helen O’Reilly (Ashbourne Rugby Club) as AR2, and Kevin Beggs also of Ashbourne acting as TMO in Stade Jean Bouin, Paris. It was probably the first time that the officials supporting the referee were all originally from North East Area clubs officiating at an EPCR match together. The match was Stade Francais v Edinburgh and was in Stade Jean Bouin, Paris. The referee was also from IrishRugby and was Dudley Phillips. 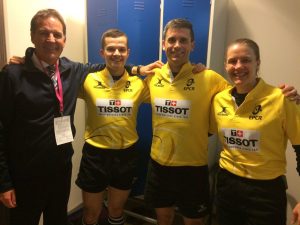 It was a very hard match with round four of EPCR games often difficult as they are they second leg of a back to back fixture. There was six TMO calls to make so a busy night all round but Dudley and Kevin probably just liked to have a chat during the game!!

Well to done one and all and it shows that there is a great career in refereeing! Do not be shy and keep involved in refereeing and get to see the many great places around the world